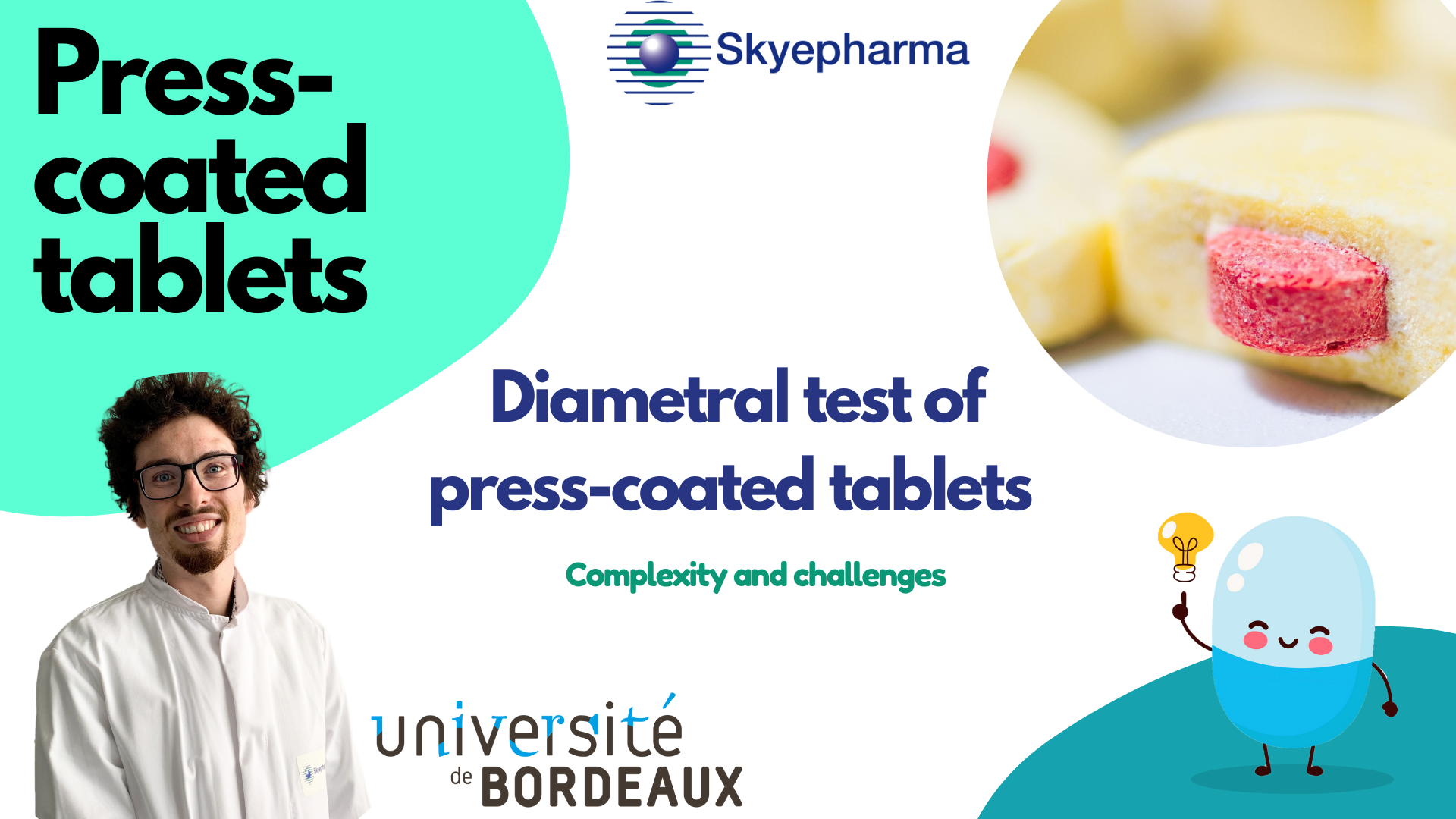 RESEARCH ON PRESS-COATED TABLETS GOES ON

The partner research teams of Skyepharma and University of Bordeaux have recently published a second peer-reviewed article on topics of press-coated tablets. This paper, released in International Journal of Pharmaceutics, focuses on the diametral compression test, that is much more complex for the press-coated tablets than for single-layer tablets.

The diametral compression test (= diametral test) consists in applying a force to a tablet along its diameter until it crushes. It is the most common test used in the pharmaceutical field to assess the mechanical resistance of a tablet. In the case of single-layer tablets, the tablet breaks in two halves with the rupture occurring on the loaded diametral plane. This allows to easily convert the measured breaking force into a mechanical strength. Instead, the press-coated tablets can have four breaking patterns: following different paths, through different zones of the tablets, breaking the core or not. The authors have named these four breaking patterns respectively “Total diametral” (A) “Laminated” (B) “Shell diametral” (C) and “around the core” (D).

The experimental series have shown that the breaking pattern depends on the material properties of the core and coating, but also on process parameters like compaction pressure and layer thickness.

The multiple breaking patterns surely indicate that the mechanical resistance all over the press-coated tablet is different according to these parameters, which is very coherent with what was observed in the experiments and simulations from the previous study. Indeed, the compression pressure has an influence on the overall density of the shell and can reduce the resistance of the core whereas the layer thickness influences the heterogeneity between the centre layer and the side band of the coating.

INVESTIGATION ON THE RUPTURE CAUSE

To understand what differentiates the breaking patterns, a technique of material science was used: the digital image corelation. This consists in imaging a surface that is deforming with a very high-resolution camera, and then numerically process the images. The process compares the position of a high number of points between the beginning of the experiment and a given moment, and makes it possible to calculate the intensity of the deformation according to the zone of the studied object (the press-coated tablet in the present case).

We clearly see that the total diametral failures have a high deformation at the centre of the face, indicating that the rupture initiates in the core. This is coherent as it corresponds to the experimental cases where the shell is the most resistant and the core is the less resistant, in particular at high compression pressure, high layer thickness and core material with a low mechanical resistance.

In the two following cases, the core is found intact at the end of the test. This means that the rupture initiation is located in the shell and do not propagate through the core. However, we see that the path of failure can be very different. On the one side, the fissure develops across the diameter, i.e. the powder layer above the core is broken, and on the other side the fissure propagates around the core and layer above it. It is once again in accordance with the process parameters causing this pattern, because the rupture around the core is got for the tablets with the highest heterogeneity between the band and the layer above the core (mainly the tablets with a low layer thickness, see previous study for more information). The high resistance of the layer makes it impossible for the fissure to break through this zone.

We can conclude that the diametral test and digital image correlation indicates the weakest region of the tablet regarding the stress state during the diametral test. The wide experimental plan that was led allowed to draw a qualitative graph of the breaking patterns as a function of process parameters:

INTERPRETATION OF THE DIAMETRAL TEST

The results presented in this work have important consequences for the development stage. First because, depending on the kind of failure obtained, different properties are tested. For the total diametral failure, the properties of the core are tested whereas for the shell diametral and around the core failures, the results are characteristic of the strength of the shell. In order to predict the behaviour of the tablet during the post-compaction process, the shell properties are the one that matters because the shell will interact with the exterior. But if the total diametral pattern is obtained, i.e. a pattern that mainly tests the resistance of the core, little information will be obtained regarding the objective.

Breaking forces obtained during the diametral compression of press-coated tablets are thus very   difficult to interpret in terms of actual strength of the tablet, contrary to the single-layer tablets.

However, this does not mean that we can’t use the diametral test as a measure to monitor the manufacture of a batch. Indeed, during the production step, the process parameters are fixed and the breaking profile is not expected to change from a tablet to another. Thus, the breaking force can reflect a variation in the resistance of the tablets, and a specification can be experimentally defined to guaranty a sufficient strength to resist the following step of the tablet life cycle (handling, packaging etc.).

These original results make the comprehension of press-coated tablets even finer, and enhance the capability and agility for the current and future projects.